Nothing incredibly interesting popped out to me this week, so I decided to title my email with a fun spanish word. It means juggling :) There are people here who do it in the streets, in the middle of big main streets, to get money. They´re actually pretty good. I´ll take a picture next time.

Well! This week was CRAZY. Monday was fairly normal, except that we had to keep running to the bus station to pick up missionary trainers (the ones who are going to train the new missionaries) and missionaries who were leaving to go home. Then, on tuesday, we spent the morning with all the new missionaries and went out contacting. It was so fun to see their energy and excitement. It made me remember my first days in the mission...I was SO confused, all the time. But now I´m one of those who knows what their doing (at least, we pretend to).

Then, on Wednesday, we spent the morning with all the missionaries who were getting transferred to other parts of the mission. They all had to take buses/trains at different times, and their companions couldn´t be left alone, and everyone was getting in at random times...it was crazy. My companion, hermana Miller, left for sevilla, and Hermana Herrera got in later.

She´s so awesome...she´s from Colombia and so she speaks spanish and has been helping me improve mine. And she´s almost done; this is her last transfer in the mission. I have been taking advantage of this and have been asking her EVERYTHING. How to be a better missionary, a better leader, what I do if I have a bad companion or if we don´t get along....she´s a wealth of experience and information. It´s aweosme :)

Oh, and THEN they split the missionary zone here... there are the individual missionary companionships, and then a group of about four of those companionships makes a district, and 2-4 districts make a zone. And then, in our mission, there are 10 zones. The zone here in malaga was made up of like 5 districts, and was super big. But this week, they merged our zone with another zone and then split it. SO...Hermana Herrera and I now do exchanges with 6 or 7 pairs of sisters every week, and they are spread over three zones. It´s crazy! But it´s super fun and I´ve enjoyed it so far.

Other than that, the week went pretty slowly, but it was good. I hope you all have a good week!

Hermana Jones
Posted by Unknown at 7:34 AM No comments:

"[Lot´s wife] doubted the Lord’s ability to give her something better than she already had."

This is a quote from a speech given by Elder Holland--It talks about how Lot and his family were commanded to leave Sodom and Gomorrah, two incredibly wicked cities. They did so, but as they were leaving, Lot´s wife looked back, and she was turned into a pillar of salt. I always thought that was a bit drastic...but obviously, the Lord has reasons for what He does. Elder Holland explained that it wasn´t the act of looking back itselft that caused her to be turned into salt, but the intention behind it. She didn´t want to leave; she was resentful that she had to obey God´s commandments.
I think that this applies very well to me. Every time change comes, change that I know comes from God Himself through His servants, I need to remember that He can give me something better than what I had.

Well, this week was AMAZING. We had the chance to do an exchange with a pair of sisters, a split with another, and still we were able to...have a baptism! Her name is Silvia, and she´s precious. She has a cool story: she called us out of the blue one day and said, ¨There´s a member of your church that was preaching to me. He gave me your number and a pamphlet, and I want to go to your church.¨ We met her and gave her a tour of the church building, and explained a few things. The pamphlet that the member gave her was about...tithing. So, in our first meeting with her, we explained the principle of tithing, which is that we give 10% of our income to God´s kingdom here on the earth, so that we can build more buildings and support some of the missionary work going on. Sivia was completely on board with everything, BUT she lives ¨an hour away walking,¨ which would be in the area of the assistants to the President (APs). (This is a very common occurance; I would say half of all the people we meet who are interested in the church are in their area haha) So, we gave them her information, and they started teaching her.

Well...last Monday we got a call from the APs who said she actually lives in OUR area. Apparantly she walks really slowly...but she was ready to be baptized THIS WEEK, and has a super open schedule so that we can meet with her, and she is so good! She´s really a miracle. Her baptism went well, and was beautiful. Afterward, she said, ¨I feel clean from all of my sins. I´m so happy.¨ It was the sweetest thing in the world :)

So, that was the highlight of the week. We also met this amazing family who all want to know more about God and follow His commandments. They´re amazing! And then there´s another inactive family that we met a few weeks ago, and they are all so nice and wonderful, and I really do think they want to know God more...they just want to know if He´s there or not. It is so amazing to see these people, and knowing that I was sent here to meet them and know them and help them. Well, God will help them...I just try to do my best to let Him do it through me.

I hope you all had a wonderful week!
Love,
Hermana Jones 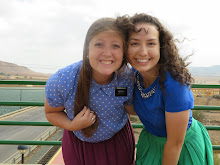